(In order of presentation)

Prof. QIN Ling is Choh-Ming Li Professor of Orthopaediatrics and Traumatology and Director of CUHK SZ-HK Innovation Technology Institute (Futian) and Musculoskeletal Research Laboratory of the Department of Orthopaedics & Traumatology, the Chinese University of Hong Kong. Prof. QIN has been working on basic ad translation research in orthopaedics over the past 30 years and is the past President of the International Chinese Musculoskeletal Research Society (ICMRS) and member of a number of journal editorial boards, including Editor-in-chief of Journal of Orthopaedic Translation.
Prof. QIN published 9 books and over 360 SCI journal papers with a H-index of 65. Prof. QIN has received over 30 competitive research grants, including AoE, TRS, CRF, GRF, ITF, HMRF, NSFC-RGC, and EU-NSFC, 12.5 and 13.5 Key R&D projects of the MOST, as well as over 30 research awards. He also holds over 30 invention or new utility patents from PRC and USA. Prof. QIN received many prestigious honors and awards, including fellow of AIMBE, ICORS, ASBMR, and IUSBSE attributed to his contribution to musculoskeletal research and innovation of biomaterials, especially biodegradable and bioactive magnesium-based Class III medical implants for orthopaedic applications that has also been highlighted recently in Nature and Science.

Prof. Michael CHAN obtained his BS in Chemistry from Harvey Mudd College where he worked on organometallic complexes, and his PhD in Chemistry from UC Berkeley where he worked on the synthesis of bioinorganic model compounds of the manganese oxygen evolving complex of PS II. His postdoctoral studies were performed with Prof. Doug Rees at Caltech where he learned to use protein crystallography to determine the structures of molybdenum and tungsten containing proteins. Michael began his independent position at The Ohio State University where he continued his interest in elucidating the structures of metalloenzymes and other proteins. There he solved the first structures of a heme sensing domain, and the methanogenic nickel-containing carbon monoxide dehydrogenase. He is arguably best known, however, for his co-discovery of pyrrolysine, the 22nd genetically-encoded amino acid in nature from the structure of the Methanosarcina barkeri monomethylamine methyltransferase. In addition to elucidating its structure, this finding led him to undertake research focused on using the pyrrolysine system to incorporate unnatural amino acids into proteins which remains one of his major focus areas today. After moving to the Chinese University of Hong Kong, Michael’s group initiated a novel research area focused on using natural protein crystals produced by the bacterium Bacillus thuringiensis. They have demonstrated that these crystals can be used as a platform for efficient delivery of protein therapeutics, as well as a novel scaffold for the direct immobilization of enzymes for biocatalysis. The current presentation is based on these latter studies.

Prof. Xinhui LU is an Associate Professor in the Department of Physics, the Chinese University of Hong Kong. She received her bachelor’s degree from Nanjing University and PhD degree from Yale University. Then, she worked as a postdoctoral research associate at Brookhaven National Laboratory before joining CUHK. Her research interest lies in energy related material science and experimental soft condensed matter physics, including morphology and device performance of organic and perovskite photovoltaic materials, bulk and surface structure of functional thin films and synchrotron x-ray scattering techniques. She is now serving as the council member of Physical Society of Hong Kong and Chinese Neutron Scattering Society.

Prof. WEI is an Associate Professor in the Department of Statistics. She obtained her bachelor's degree in Mathematics from Tsinghua University in 2009 and her MSc Eng degree in Computer Science and PhD degree in Biostatistics from Johns Hopkins University in 2014. Her research focuses on developing statistical methods for analysing noisy, complex and heterogeneous big genomic data. Her six Bioconductor R packages have been well received by the community, with more than 69,000 downloads to date. Prof. Wei received the Faculty Exemplary Teaching Award from Faculty of Science, CUHK in 2017 and the W. J. Youden Award in Interlaboratory Testing from the American Statistical Association in 2019.

Prof. CHAN is an Associate Professor and Director in the Earth System Science Programme, Faculty of Science at The Chinese University of Hong Kong (CUHK). His research area is ambient air pollution, focusing on the sources and formation meCHANisms of particulate matter (PM). His research group applies novel analytical techniques coupled with high resolution mass spectrometers to investigate the composition and transformation of PM in the atmosphere, such that we can better understand their sources, environmental, and health impacts. Prof. CHAN received his PhD in Environmental Science and Engineering at California Institute of Technology. Prior to joining CUHK, he was a postdoctoral fellow in the Chemical Science Divisions at Lawrence Berkeley National Laboratory.

Prof. YANG Hongfeng joined CUHK in 2014 and is now an Associate Professor in the Earth System Science Programme. He is actively working on earthquake source physics, subduction zone dynamics, fault zone structure and evolution, and induced earthquakes. He is a committee member in several committees in Chinese Geophysical Society and Chinese Seismological Society, and serves in the editorial board for several journals and as an associate editor for Seismological Research Letters. In 2018, Prof. YANG received the Fu Chengyi Young Scientist Award, in recognition of his contributions to integrating earthquake rupture dynamics and observational seismology to advance our understanding of earthquake physics and seismic hazard evaluation. Prof. YANG is the first recipient of this prestigious award from Hong Kong. 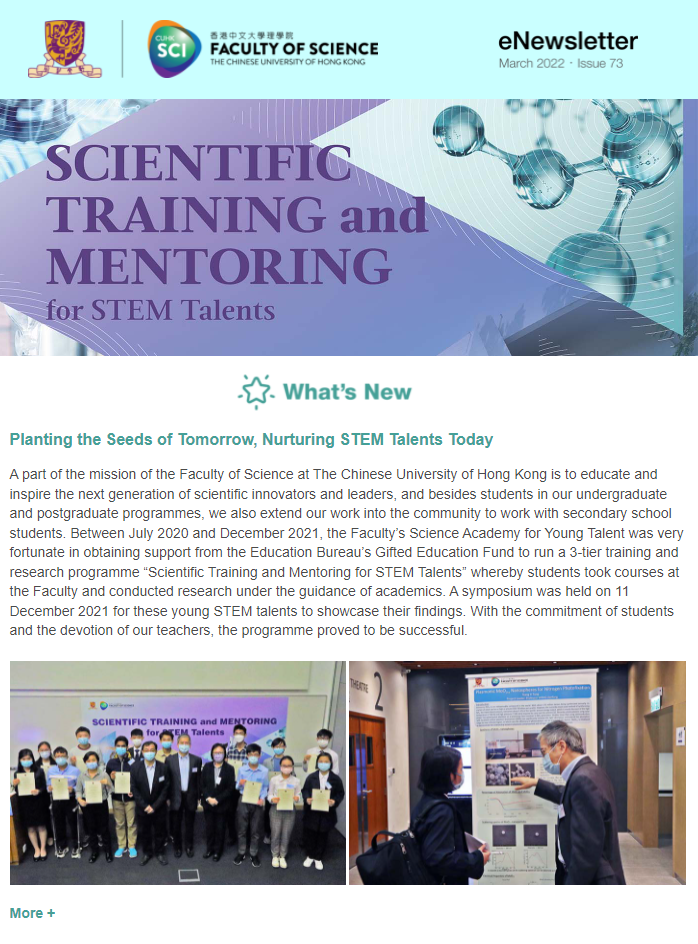